Where in the World is VENOM?? Part II 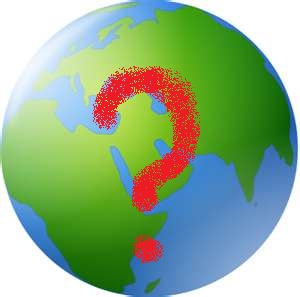 As you may or may not have heard, an ARC of VENOM was stolen by post office ninjas during Apocalypsie to Apocalypsie transit a few months ago. (No Apocalypsies were injured during this crime.)

As a traveling type of chick and all-around international woman of mystery, I decided to safeguard the rest of my dwindling ARC supply by hiding them in an exotic, hard-to-reach place.


Only strong-willed, pure of heart, sound of mind, intrepid explorers will be able to locate these rare tomes. (Or, you know, if you're good at googling you might find them too.)

The logistics:
1. I post clues to the location of the ARCs at random times. First clue will be posted on Saturday 6/9.
2. You figure out the location from the clues. You must be specific. VENOM is in Chicago--NO. VENOM is at Wrigley Field--NO. VENOM is leaning against second base at Wrigley Field--YES. Got it?
3. You post your guesses in the comments beneath the latest clue.
4. Each intrepid explorer (that’s you) can guess a max of twice per clue.
5. If your guess is super-duper-close but not quite there I won’t post it. Instead I will email or DM you on twitter (meaning you'd better post your preferred method of contact with your first guess) to give you one shot to be a teensy bit more specific.
6. If somebody else guesses the exact location before I get a hold of you, they win.
7. To win you just have to guess the location. Note: You guys were SO good at this last time that I have picked a much more obscure (but still totally awesome) hiding place. There will be THREE winners this time. Also, everyone who enters and sends a mailing address to my fionapaulbooks at gmail email with the subject: 'Gimme bookmarks' will receive an autographed bookmark or two.
8. Once again, you don’t have to follow the blog to play, but I will be posting clues at completely random times and if you know me at all, you know that I am awake at all hours of the day. Blog followers will probably have an advantage.

The fine print:
Can international people play?
Always.
What if the post office ninjas steal these copies too?
The best I can do is priority mail with insurance and delivery confirmation. If the ninjas still prevail (they seem to have a grudge against me) I'll send another prize pack, but it might not be exactly the same.

Ooh, prize packs. Tell me about them!
Because the fearless assistants and I know you have a choice when it comes to blog contests, we have packed Ms. VENOM alongside a swagorific, stunning array of other tempting goodies.

First prize: The Primo-deluxo-mother-of-all-prizes consists of a Penguin Breathless Reads slipcase with all five Fall 2012 Breathless Reads galleys, a Hunger Games mockingjay pin, a super-sexy Gale Hawthorne bookmark (sorry, if you're Team Doughboy you'll just have to give it away to someone with better taste), a teefury sticker pack, a fun Wonder Woman totebag and a sprinkling of surprise BEA-gathered Apocalypsies swag. Also, there may be chocolate...unless I get hungry. 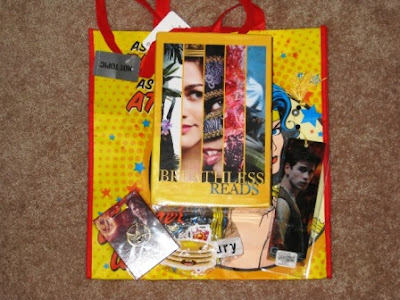 Second prize: The super-duper St. Louis-a-licious second prize consists of an ARC of VENOM, an ARC of LEGACY OF TRIL: SOULBOUND by Heather Brewer and an ARC of ELEMENTAL by Antony John. Yes, we all live in St. Louis. (And you thought St. Louis was only famous for, like, beer and baseball and Nelly and crime and stuff, didn't you?) 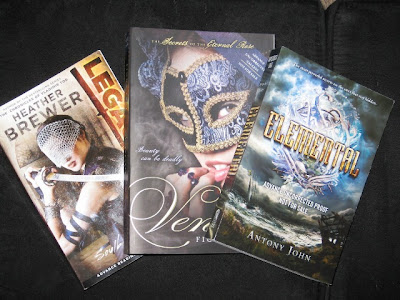 Third prize: The we-give-out-lotsa-prizes-cuz-it's-fun third prize consists of an ARC of VENOM, assistant not included. And yes, Taz is totally licking his catlike-lips because the book is so darned juicy. 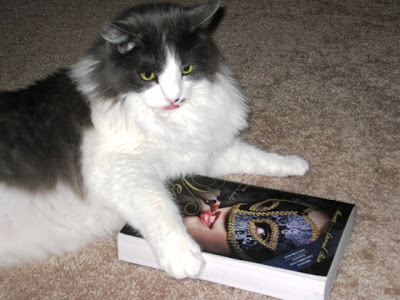 Questions??? Put them in the comments so I only have to answer them once :)