I am breathless with shock at being chosen alongside Jessica Khoury's ORIGIN and Lili Peloquin's THE INNOCENTS to be part of the Penguin Teen Fall 2012 Breathless Reads campaign. 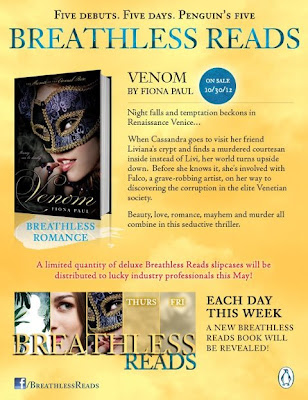 But mostly, I am honored. Thank you Penguin Teen :)

And now I'm so giddy and giggly and shaky that I can't even type anymore, so for more about what leaves me breathless, check out the amazingly talented Lauren Oliver's blog. And then head on over to the Breathless Reads sampler to read the beginning of VENOM!!!